Jack and the Beanstalk Caper

The True Story of Jack and the Beanstalk Caper 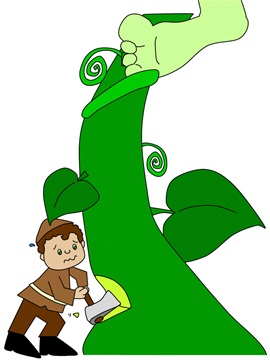 Once upon a time….you do know all fairy tales start this way.

A rather naïve boy with limited intellect traded a cow for a sack of what the used cow salesman told him were magic beans. Now this cow was the only thing of any value Jack’s family had to sell as they faced starvation after the cow stopped giving milk. When Jack returned home he had a wide grin on his face ear to ear. Surly his mother would be impressed with the trade he made for magic beans. Widowed mother Rose Kentady threw the beans out the window in anger and disgust. “Why can’t you be more like your departed father and traded that old cow for some smuggled whiskey we could sell at an enormous profit,” she said. “You can just go to bed hungry.” And he did.

Well the next morning when the sun streamed into his bedroom’s broken glass window the light beam came with a long spindly, green leafy, vine that reached in to tickle his nose. Now wide awake, Jack threw open the window sash to see how the vine got into his bedroom. He saw a wondrous bean vine with a trunk the size of a redwood tree. The bean vine reached all the way up and through clouds floating above in a vivid turquoise blue sky.  Where there is a giant bean vine there just might be giant beans for breakfast, Jack thought. His starving stomach touching his backbone as Jack leaped out of the bedroom window to climb the vine and find its giant beans. Well you know the rest of the story. No beans were found, but he did find a giant castle floating in the clouds. The castle’s owner was also a giant or as we now use a more politically correct label, the giant and his wife were victims of hyperplasia of their pituitary glands. Like dwarfs who prefer “little people”, giants prefer “big people”. Mr. Large Person’s wife took Jack into the castle and fed him when he showed up at her door because she had so few visitors and enjoyed the company of the small boy. Her husband was on his annual terror tour of a local village. He would certainly not approve of another man/boy visiting with his wife while he was away. Jack was not grateful for her kindness. On each of three visits he fled the castle with several of their prize possessions including a bag of gold coins, a goose that laid golden eggs, and an automated golden harp that played songs without any coin slot.

Now Jack’s mother was delighted with the acquisition he had made at the giant’s castle spending the gold for a spa treatment, killing and eating the goose when its golden egg laying production slowed, and trading the golden harp for a fine carriage when the harp refused to play top ten Metallica music hits. She ran through Jack’s resources like a stomach virus and sent him back up the vine to gather more of the Large People’s wealth. This last trip didn’t work out so well for Jack as you know. The Large wife grew tired of Jack’s whining about the rich needing to pay more taxes and share their wealth with poor people down below. About that time her husband made an unexpected return to their castle. Do you remember the giant’s “Fee..Fi…Fo..Fum” thing? Jack had to run for his life or be eaten by the Large Man. Skinning down the bean vine ina hurry; he called to his mother for their axe and chopped down the vine with the Large Man clinging to it. The giant’s fall was good and bad news for Jack and his mother. No longer were they able to raid the wealth of the Large People’s castle and of course the giant’s wife was now a widow. That was the bad news. The good news was the giant was dead and he left a huge crater in the back yard of Jack’s home that immediately filled with water making a great lake for fishing.

And now the rest of the story….

Just when Jack and his mother were beginning to reap the profits from their lake fishing enterprise there was a knock at the door. It was the Constable Fred of the SUNY Township. “Are you Rose and Jack Kentady?” he asked. “Yes, we are. What do you want?” Jack’s mother replied. “Well I have a complaint filed by a Mrs. Large Person charging you with a 459 (Burglary), 487 (Grand Theft), and a187 (Homicide) Jack. You are under arrest. Anything you say can be used against you in a court of fairy tales. You Rose Kentady are also under arrest for 354 (Possession of property obtained by crime and a 355 (Trafficking in property obtained by crime). You will both come with me.”

So you see crime does not pay even in fairy tales unless of course you are rich, powerful, a pampered minority, or a politician and connected. Jack and his mother were not. Now the question is why there was a cover-up to this arrest. I leave that mystery for you to solve.

Another clever Clever Tale! With a political cover-up to boot. it just doesn't get any better than that!!

How Clever it is to read a further ending

. Love it I am your biggest fan.