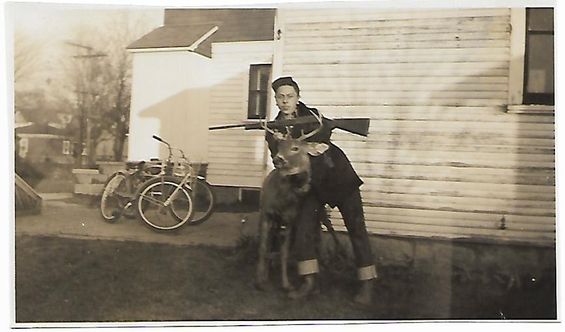 I remember looking at the photo album filled with black and white pictures of Grandpa Clever and his four sons on their hunting adventures. The pictures were all black and white. Maybe they were too poor for colored pictures.  By the time I was old enough to walk the fields for game.  Grandpa had given up hunting. He was physically able to hunt, but chose not to do so. My Dad brothers and I spent wonderful days hunting pheasants, deer and grouse. These hunting adventures Grandpa could have enjoyed with us if he chose to do so.  His lack of participation may have been the result of his involvement in an automobile accident, and law suit that threatened his work, income, and future earnings.  Was he losing his eye sight?

On my first deer hunt I was able to take an eight-point buck on a farm over the hill from our Lime Lake cottage. When I returned to our home in Blasdell, NY it was time to take more black and white pictures of the deer and the mighty hunter. My sister/cousin Karen and I decided to prop up the deer using a large wooden carpenter’s construction horse. Grandpa George came to see my deer and decided to help us stage the picture. As we struggled to place the deer over the wooden support stand for our photo Grandpa began to tell us a very special deer hunting story.

Just as my deer was taken in an abandoned apple orchard, Great Grandpa also liked hiding in apple trees to ambush deer eating in apple orchards.  The smell of fresh decaying apples is truly intoxicating for the deer. Rotting apples scattered on the ground around the tree make alcoholic cider.  Stories are told of deer herds staggering drunk from eating too many fermenting apples.

Grandpa continued his story as we worked to secure the deer for pictures.

“It was a time of simple means and limited resources for the Clever family in Pennsylvania.  There was no extra money for store-bought rifle cartridges or shotgun shells.  Scraps of salvaged metal rammed down a musket or Pennsylvania long rifle barrel on top of black powder charges. One single shot would have to do when hunting deer to feed the Clever family. My dad climbed the tree with one hand on his rifle. He was camouflaged by the apple tree leaves, and deer could not see him.”

The thought of climbing into a tree to be out of sight and camouflaged on my next deer hunt was very appealing. There was more for me to learn about hunting in Grandpa’s story. My sister/cousin Karen and I forgot about arranging my buck deer for pictures and listened intently.

“A very large buck approached the tree with a fine set of multiple point antlers, maybe a sixteen pointer.  The Great Grandpa Clever aimed along the lengthy octagon shaped barrel of his Pennsylvania, single shot, muzzle loading rifle. Holding his breath, and slowly letting out a little of the exhaled air he finished with a trigger finger squeeze. The rifle bead was cradled in the front iron sight groove pointing directly behind the shoulder of the deer.  The flint in the lock sparked making a flash in the pan. Smoke curled and drifted up around higher limbs of the apple tree stand.  Steady..Steady, he reminded himself. Give the gunpowder time to burn in the pan leading down into the rifle barrel.  He waited for the instantaneous blast propelling the round of lead and iron scrap metal toward the cautiously encroaching deer.  Whack! Like the first sound of a lumber axe on a tree, the shot lifted the deer driving it to the ground.  Legs thrashing, the buck tried to rise again, fell and was silent.”

Grandpa George straightened out my deer’s legs to make it look like it was standing. It was now held up by the large old wooden carpenters saw horse.

“My father, your Great Grandfather, watched the deer’s death scene for only a moment.  There were chores to do if the deer was to be hanging in the barn by the night.  He jumped from the tree with his razor sharp hunting knife and ran toward the deer, a little less cautious than he had been on his first deer kill at the age of six.  This was, after all, just another way of providing meat for the family table. It was not unlike the hundreds of chickens, pigs, sheep, and cows that he had butchered over the years.  As he bent down to cut the deer throat for a quick bleed out, the deer head with its beautiful rack of shiny pointed horns rose from the ground with a swing that caught his loosely held knife.  The horns packed such a large punch and force the long skinning blade was knocked into the nearest pile of deep apple leaves.”

Grandpa George paused his story long enough for us to think about the dangerous situation his father was in when the deer charged. Grandpa spit tobacco juice phlegm into the grass. Clearing his throat, he looked at each of us to be sure we were focused on his story and not the pictures we were going to take.

“Before my dad had time to think about the location of the knife, the buck gathered itself up under wobbly feet. Seeing the man who caused his pain, the deer charged his tormentor pinning him to the gnarled bark and trunk of the apple tree.  Grabbing both sides of the horn wrack with his hands, my father pushed back against the force of the deer. The deer was determined to finish him off with a few stabs from razor-like horn points.  It was clear to my father the buck deer was the stronger in this wrestling match of death.  There was no skinning knife he could use to kill the deer as it was out of reach under a pile of leaves. His empty rifle was dropped when the deer charged. Now it was also beyond his reach.   Desperate, but determined to survive this dance of deer horn doom, my father remembered the pocket knife carried in his shirt. It would be no easy trick to reach it, and open the small blade while holding the deer horns pressing him to the tree. If he could reach the pocket knife it could change the balance of this struggle.”

Karen reached over to my buck’s horns grasping them with both hands. I could see she was trying to visualize the effort it would take for Great Grandpa to keep the deer from pushing its horns into his stomach while retrieving his pocket knife. Grandpa George studied her for a moment before continuing his story.

“Freeing one hand, he pushed the deer’s horns away reached the pocket knife while. The buck continued to twist his head pressing home its razor sharp tines.  The deer was winning this arm wrestle, and soon would poke holes into your Great Grandpa.  The buck eased his pressure for a moment while fighting for better hoof purchase with its wounded and shaky legs.  In that moment, my father grabbed the pocket knife, opened the blade, holding it ready for the next lunge by the deer.  This time the wrestling would be a bit more equal.  A knife is nothing if it is not sharp.  Your Great Grandpa had a small sharp pocket knife.  He fended off the buck with one hand while cutting through the deer’s thick black neck hair. The knife blade found and cut the vital deer carotid neck artery.  The huge buck twisted to one side out of reach as it prepared for another charge. His charge never to come.  The deer collapsed on the ground, legs kicking with a brain message to charge as the deer’s life blood flowed on the ground."

"It was not a time for celebrating.  It was a time for giving thanks to the Creator for life, and for the deer’s gift that would feed and clothe many in the Clever family.  Your Great Grandfather said prayers, carefully cleaned, and dressed out the buck before carrying it home. This was a deer hunt story my father told me often. It is a story you will always remember.”

We would remember, and our pictures were taken of my first buck deer.